A forum for the discussion of matters of a technical nature. All such activities are undertaken at the readers discretion and own risk. If you don't know what you are doing, don't blame us if it all goes wrong!
Post Reply
77 posts

Can you just confirm something . Looking at your photo your main "CLK1" output which goes the vacant pin on L13 is actually connected to GND on my radio . Your pcb looks to be the same as mine , but maybe the solder side layout is different on the Realistic ? My main connection for L13 is on the bottom pin . Not the top . Silly error from me , but I was desoldering tonnes of stuff at the time , and I missed it . I'll need to remove that board to rewire it .

There may be a slight pinout difference from mine (a Realistic TRC-451), follow the trace, it connects to the capacitor that goes to the base of the downmix transistor: 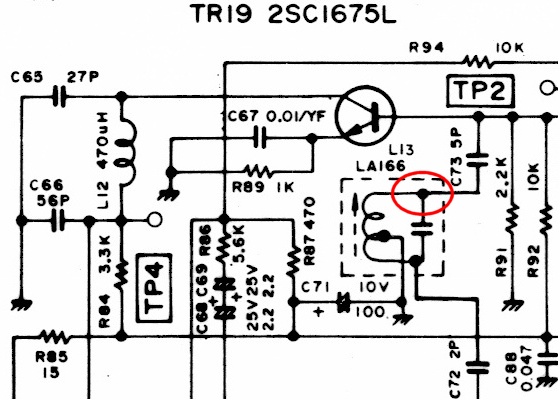 Hopefully grounding it didn't kill the 5351 chip. I'd leave it off and verify you have a 15MHz signal at CLK1 first...
Top


My schematic is different from yours . Think I need to remove C72 as well

Yes, that's very different to the 2824 radios we have here. You will need to remove C72 in that circuit.

That also explains why the radio still transmitted and received, albeit on the wrong frequency.

The PLL divides the 10.240 by 2 and outputs the result to pin 10. It's a square wave, so it's also full of odd harmonics. The inductor and two capacitors are a bandpass tuned to 15MHz, so they let through the third harmonic (15.360 MHz) and it is then mixed at the transistor with the VCO to produce the downmix signal needed to lock the loop.

BUT: when you remove C72 and there is no output from the 5351, there will be no downmix signal at all and the radio will quit.

Find why there is no output from the 5351 board before going any further. It's either faulty / damaged, or not wired correctly. Disconnect the output from CLK1 and measure with a scope and frequency counter. You should have a 3V P-P waveform at CLK1 at all times around 15MHz, and 25MHz at CLK0 when it's enabled at the PC app.

Once you have the waveform on the 5351 board, remove C72 and connect CLK1 to the L13 hole that goes to C73. The radio should come to life.

Once that's done, use the PC app to configure the 25MHz, offsets, and clarifier.
Top

OK . I'm getting there . Think my pll was knocked out at some point during the last post and never came back . Anyway ...

Powered on and everything is looking good . I still have to set my SSB offsets , but the radio is working fine on both the MID and HI bands . I need to hard wire in the HI , +10khz and +5khz and tidy things up .

Thanks for your help with this Sue . I'll post a photo or 2 when I'm finished .

You should have a healthy (1V P-P or better) signal at TP4 / Pin 22 of the uPD2824 chip, ranging from 0.91 MHz on channel 1 to 1.35 MHz on channel 40.
If the radio was hovering at a random frequency then that signal was missing for some reason. There's not much to that circuit to troubleshoot, a transistor and some passives. Anyway, sounds like it came to life. Possibly a stray fleck of solder or other debris?

You're nearly there with this one...
Top

To be honest I haven't actually checked its VCO range yet . I was just really concentrating on getting those 2 boards working. Saying that I might give it a check before I start to finalize things as I think most of the VCO section is under my oscillator board , and it might be a pain to access that area if I need to change or add a cap.
30TM060
Paul aka "Sammy". (108) PY60 Old Paisley DX Group (RIP Rab Markie)
Ex GM0 , now EA5 .
Handle "Fortune Hunter" back in "the day"
Radios ....? Anything that says "TAIWAN R.O.C" on the back.
Top

You shouldn't need to change any components of the VCO if you are only adding one more block of 40, at most you'll need to tweak the VCO inductor (L14 from memory) a fraction of a turn to get it to lock on the highest channels.
Top

Yep, been there done that. Track cutting and wire linking to repurpose useless switches (like PA and instant channel 9) for channel control always was a bit of a pain on that model...
Top

It's actually easier on this one than on the Cobra 146 GTL . That has a front pcb mounted vertically and the switches and controls soldered to it. I gave up with that one. I was thinking about using magnets and some reed switches with it. Or fit an external box with a few switches on it. To be honest I do enjoy this part when you need to break it all down and rebuild it.
30TM060
Paul aka "Sammy". (108) PY60 Old Paisley DX Group (RIP Rab Markie)
Ex GM0 , now EA5 .
Handle "Fortune Hunter" back in "the day"
Radios ....? Anything that says "TAIWAN R.O.C" on the back.
Top

Yep, know that one, that was actually one of the radios converted later. Pots and even the mic socket from memory mounted onto that front panel board

Sorting out these 4 switches is actually taking longer than the nano install !

I usually do that part first (after doing any repairs needed to get the radio working perfectly as stock), then do the main board mods second.
Hopefully you'll lots of use out of that radio after putting in all that effort to mod it...
Top
Post Reply
77 posts