A forum for the discussion of matters of a technical nature. All such activities are undertaken at the readers discretion and own risk. If you don't know what you are doing, don't blame us if it all goes wrong!
Post Reply
60 posts

updates.....
slight prob with software not sure the issue
xloader to upload hex file to nano clone .....works super simple all is needed is the usb lead 15734 bytes uploaded
open your software everything works .....close software and reopen cant find board but sometimes works fine (may be my setup or clone as works fine on an uno)
tested so far ...test radio is a cobra 148 gtl dx mk2 pb010 (its sitting around doing nothing and a common well known board be better than a jack )
the clarifier is perfect no resistors needed set the control 12/12 o'clock and in your software they bang on and track perfect
dds board is a 5351 clone
setting the clock 0 to 25mhz required a 426 offset
all the inputs for band switching ect all working
cant test further as wrong frequencies for that type of radio.
some thoughts sue add a 5kc in the coarse clarifier settings then the +5kc and -5kc can be omitted in some radios with a dual clarifier as will at lock to lock be "locked" on to the zeros
163dt307-chris

just test fitting and already had the dds board with the sma fitted so just used that for now
You do not have the required permissions to view the files attached to this post.
163dt307-chris

would this be correct place Sue lift the leg of the cap and inject there?
SUEDDS.jpg
You do not have the required permissions to view the files attached to this post.
163dt307-chris

btw i used a 10ohm 2w resistor and a diode in series with the VIN and power switch just to keep the voltage close to the 12v spec max input and stop usb back feed, as the 5v from usb when the radio was off was back feeding via the VIN (might be my chepo clone)
163dt307-chris

Could be a driver issue (if you are using Win10 you should be OK) or there is a small speed difference (the PC to Arduino comms is asynchronous, i.e. unclocked, so comms rate is critical) between the Arduino and the PC. The PC app basically says "are you there" to the Arduino, and if it doesn't get the answer "yes I am" it throws up the "can't find" error.

Try another PC (preferably one using Win10), using a direct connection (not a hub).

Nearby high power RF can cause USB errors, if it drops out after transmitting then you've found the culprit.

If the Arduino's clock speed is out it can cause comms issues but otherwise work OK. Measure the 16 MHz crystal on the Arduino board - you'll probably need a X10 probe with a sensitive counter to avoid loading the crystal.

A COM port number clash can cause it too, had this once with a brain dead GPS unit updater app that claimed ports 5-8 all to itself, even after the app was closed. Easy to change in Device manager.

To check in the app while its working, click on "About". This will give you the VCP (virtual communications port) number: 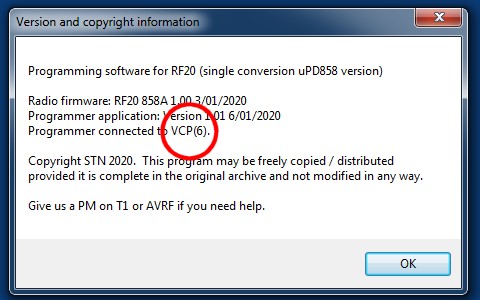 Then check your Windows settings:

Device manager - Ports (COM and LPT), look for "USB-SERIAL" or similar (if you are using china clones, it'll list it as "CH340").
Double click its entry, then select the "Port settings" tab. 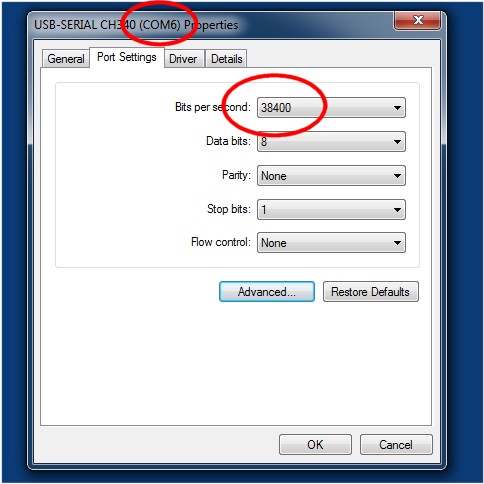 The number circled in red at the top should match the VCP number in the "About" screen (in this case, 6).
Try forcing the "Bits per second" as used by the Nano to 38400 (lower red circle). Leave the others at default.
Then repeat the connection a few times to see if it's reliable.

They are very rare down here, had a best guess of the downmix and carrier frequencies for each mode and changed the offsets to suit.
I'll email you an experimental hex and app to suit it (hopefully!).

The shift amount for the clarifiers is only approximate to keep the app neat - for example the +/- 200 Hz is actually +/- 256 Hz, less the dead zone. It could be made exact without too much difficulty, only drama might be if you want to go just over your 5 limit because the "zeroes" station you are talking to sounds a bit squeaky and you need 5.5 to make him clear.

The Arduino boards us a "low dropout" 5V reg which will work down to a 6V input, so a safer option is to power it from the radio 8V rail. Most of the Uniden and clones use a 1A or higher rated regulator / pass transistor so supplying the 50-75mA for the Arduino and SiLabs won't stress it.


would this be correct place Sue lift the leg of the cap and inject there?

To connect the SiLabs, try where you marked, the limited bandwidth caused be L17 may cause issues when you change bands using the downmix instead of the adders. I'd try removing TR29 /L17 and connect the output of the SiLabs board to the L17 hole that runs to C95. In reality, both connection points would probably work but can't say for sure without a radio to try it out on.

To test if the downmixer circuit is working, and to compare the original crystal circuit with both connection points, use a scope to measure the frequency and amplitude at pin 2 (fIn) of the PLL (IC5 / TP4) on the following 3 channels:

Note: these numbers are for when you use the original adders to select the band, not the Silabs board!

The amplitude should be at least the same as the original circuit when the SiLabs is substituted for the crystal oscillator.

Let us know how you go, we rarely see that chassis down here...
Top

thanks for the reply Sue btw i can change chassis i have several here cybernet and uniden i could use and there is no rush on my part as i have lots of stuff going on.

about the 5kc on the coarse is not a problem if say a station is transmitting off frequency then the clarifier can be used . but in a single clarifier radio thats unlocked i can see the problem as you noted .

The app doesn't store the adjustments, they are written to the EEPROM of the Mega chip on the Nano.

Let us know how you go with the Mk2 and what connection point you used, and I'll add it to the installation how to document we'll include with the final version - thanks.
Top

testing
possible range 25.515 -29.205 more is possible but this is testing ranges using a combo of your board band settings and the std super low to super hi .
example radio set on super hi 27.865-28.305 and enable /pulled hi d5 gives 28.315-28.755. not going into bandwith issues or vco tuning to get lock this is just testing.
software is great... perfect job Sue all the adjustments i can make and alter.
the radio i was using is a load of crap so had to use a different 1.
dds feed point was just the lifted cap and yes the vco coil is limiting things i had to retune to get the higher and lower frequencies more testing needed with it removed.(but the range i was using was taking the **** a bit
i do have a lot of testing to do but untill the software was sorted i was unable to continue.
will report back in a few days when time for proper testing and checking for spurs ect

this mk2 is not the ideal choice of radio for this board as the radio will cover a good 6 bands with a few diodes on the adders
but it does give the chance of upto 10 bands and what seams is a lot more stable radio and other things like 5 kc jumps ect .
this board will shine on an 858/2824/8719 pll based radios that are more limited
163dt307-chris

If you could report any bugs / issues and the amplitude measurements at Fin (PLL pin 2) compared to the original circuit it would be great. No hurry, whenever suits you

I'll be away on a trip for a few days, when we get back I'll move onto the other radios.
Top

Great work Sue. Thanks for pointing me here.
NOT WINDOWS COMPATIBLE
Top

Thanks for sharing this, it is interesting for sure. I could just about do this conversion, but I am still a little green. I got some gear together and am starting to learn how to do alignments and small mods and repairs. I will definitely be thinking about this as I go along.
Chris
Top

If you need help just ask here, it's still ongoing but has been shoved to the back of the bench because on the virus disruption to our normal work routine. Hoping to get the uPD2824 and MB8719/34 variants done over the Easter break, can't go anywhere so may as well use the time to finish this one off.

Let us know your experience level and what test gear you have if you need a hand with it...
Top
Post Reply
60 posts