I had this little handheld back last year and have used it to listen to local amateur activity on 430 mhz etc.
Its been fairly good to use and is nice to throw in the backpack for when you go for a bit of hike/ride out.
The two original antennas that came with it are stated to be usable on 136-174-240-250 mhz for the shortest antenna, the long one supposedly covers 136-174-400-520 mhz.

I was sceptical about those claims so I got myself an antenna analyser and plugged them in, result is theyre nowhere near!

The long antenna gives best match/swr <2.0 :1 at 391- 425mhz and isnt usable at any of the other frequencies.
The short one goes 146 to 325 again same swr readings with usable peaks at those frequencies.
No wonder the range at 446 wasnt up to much.

I bought an abbree tactical antenna and thats pretty good at pulling signals in probably due to its length and thats got 3 usable frequencies, 156, 236 and 428.5 where the swr is 2 or lower.

The last antenna I tried was a nagoya na-771 supposedly good on 144 and 430 mhz. It wasnt, its main usable frequency was 179mhz at any other the swr was well over 7.
I decided to alter the length using the analyser to judge the changes and carefully cut the length down.
Eventually ive got an antenna thats resonant at 446 and swr<1.5.

Just using it to talk to my brother locally dosnt give any indication of if its any darn good so ive been heading local hills to see what I can hear and if I can be heard.

First call out yielded a net operating in walsall, was easy to hear all the operators there and they had me back also with good audio etc.

Over the past couple of weeks Ive had contacts at over 20 miles including one on the other side of a hill in wolverhampton with myself out by bridgnorth.
Its great to hear someone sitting on a morrisons carpark respond to a call given that its on a handheld with a whip no longer than 8 inches and to have such clear audio reports.

One of the days Ill have to head a bit further out and see if I can get a much longer qso, maybe can set something up on here?
Top

I've bought and tried quite a few Chinese aerials 3-4 years ago, I had an analyzer then too and checked every one, like you do, and they were all pants, nothing, whether 'Diamond' or 'Nagoya' 771 or 701 or stubbies and rubber covered springs was anywhere near the quoted frequency range (144/430 etc.), even the BF-888S aerials were set for 409Mhz. Most were in the red (3 or 4:1+) on any freqs I (we) use, although most gave better T/RX than the supplied aeriels, but it didn't give me any confidence using them for fear of blowing output stages. Most supplied aerials did cover the ham bands, just not many were very efficient. I did have a lot of different Chinese handhelds then so could compare a few.

What did work? I have a couple of old, Japanese original Diamond aerials (BNC but have adapters), an RH771 (14" long) and RH3 (1.5" stubby) that I've had for 20+ years and they did work and test very well, even the stubby, but they were expensive at the time, so I guess you get what you pay for. I do believe they are still available, not cheap but worth it if that's what you want.

On a cheaper note, for the budget conscious like myself, the only aerials that were any good were the Retech brand, made in Taiwan (surprise, not), they weren't the cheapest compared to Chinese brands (or copies of Japanese) aerials but less than real Japanese ones. I've tested the RHA-771 (long), RHA-701 (medium) and the RHA601 (stubby) and they all work as well as the old Diamond aerials, even the stubby (the RHA601 is hard to find now), I was well pleased so if you want a quality replacement aerial they are well worth a try.
The perfect face for radio.
Top

Thanks for that Mitch, Ive just had a look at that RHA-701 and its identical to how my modified nagoya(or cloned version) looks now.
Leastways it looks like im in the ballpark.

Well last Saturday I managed to get some altitude, 1770 feet or thereabouts and after setting a sked with kid brother who by now was well over 20 miles away I gave a call.
The baofeng worked fine, there was some fading in and out, im not sure how badly local atmospherics affect this band? but it was hazy and not so clear at times so Ill attribute that fading to the conditions rather than the radio.
Signal was a radio 5 most of the time, extremely loud and clear which surprised me being on the whips, brother tried an abbree antenna which came over stronger still but didnt receive me as well and its a bit long and dosent resonate on 446 so well.

For another test I took with me an Icom ic446s, stock 0.5watts and stock little non detachable antenna.
Definitely not as strong as the baofeng because of the power, but on receive was just as loud, again a surprise at that distance.

A quick test with the dmr yesterday at about 5 miles gave crystal clear audio, ill be interested to see how that performs at much longer distances with optimised whips.
All in all Im quite satisfied with this band its surprised me how well it can work.

Mitch wrote: ↑
05 Apr 2020, 21:30
On a cheaper note, for the budget conscious like myself, the only aerials that were any good were the Retech brand, made in Taiwan (surprise, not), they weren't the cheapest compared to Chinese brands (or copies of Japanese) aerials but less than real Japanese ones. I've tested the RHA-771 (long), RHA-701 (medium) and the RHA601 (stubby) and they all work as well as the old Diamond aerials, even the stubby (the RHA601 is hard to find now), I was well pleased so if you want a quality replacement aerial they are well worth a try.

Any ideas where to buy the Retech's from these days? Had a quick look around and couldn't see any in the UK and those on ebay from the US had ridiculous postage on them, seriously £29 to ship an antenna. Might as well buy a diamond for that money.

I've only found the one online that ships to UK but still over £20 delivered, all mine cost about a tenner or less inc. p&p, I bought most of mine in 2013 and a couple more 601's in 2015, the style changed but still work well. I've had a look through my old eBay emails and none of the sellers have any now unfortunately, Amazon doesn't have any either, they used to, I have seen a few mobile aerials there but no rubber ducks. I've even tried looking for the company but drawn a blank.

Maybe they're no more and all that's left is new old stock perhaps (hope not) and they only seem to be available in the states anyway, more's the pity. If they're rare there won't be much choice of male or female connectors either. Damn it, can this lockdown get any more depressing

Or maybe I bought them all, lol, sorry. The 601 really suits the TH-UV3R though

You do not have the required permissions to view the files attached to this post.
The perfect face for radio.
Top

Took the little baofeng radio out this afternoon and got on a hill, gave a shout out and made an easy contact in telford which is at least 20 miles.
Contact thought I was running at least 50 watts as I was so loud to him, however I wasnt, was just using the same standard output power as always, and the cut down nagoya which really does work great.
I might just get another. 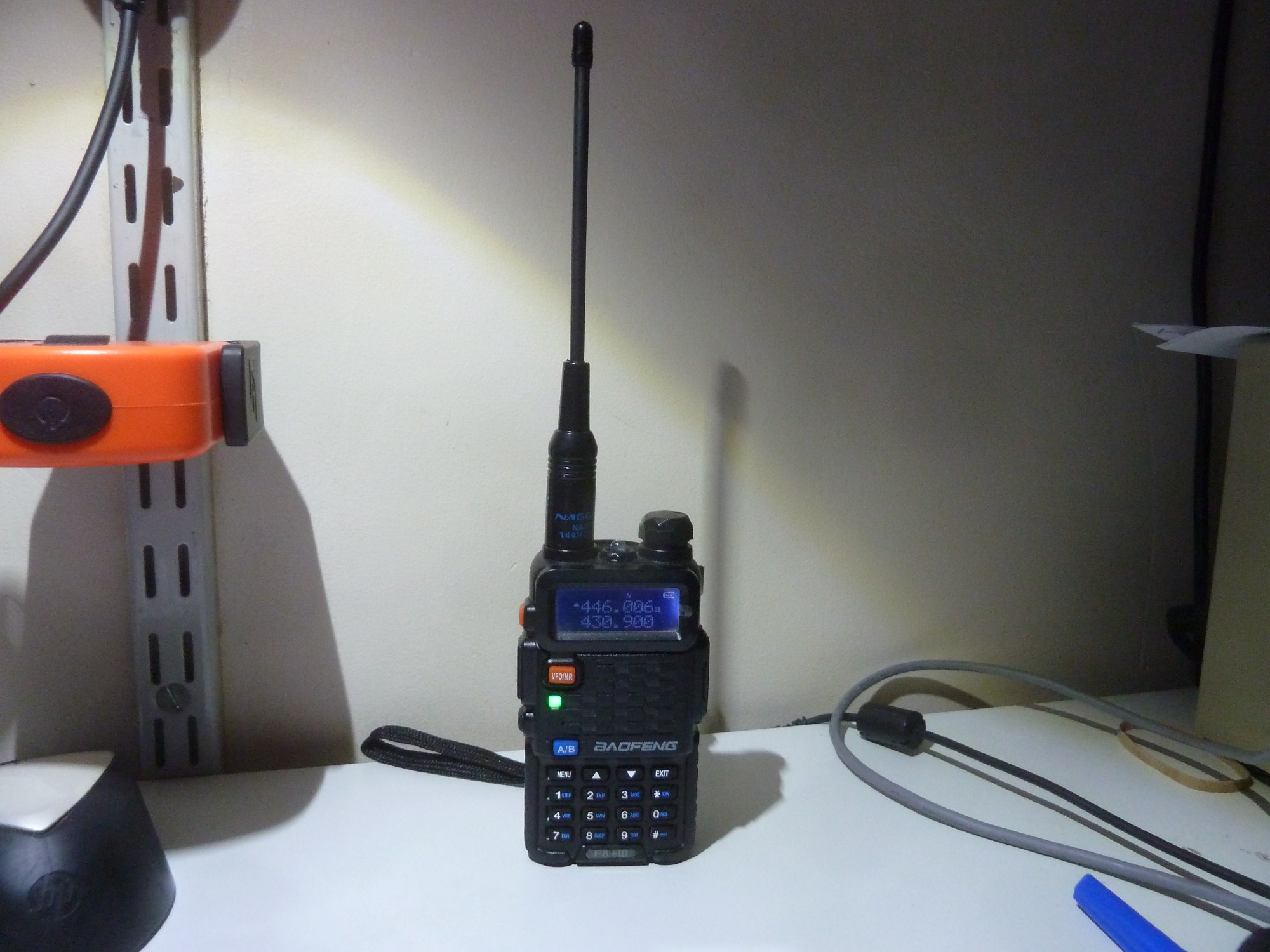 Just out of interest what length is your Nagoya now that you have trimmed it for 446?

I have a Fake NA-771 here that I am willing to do some experimenting with. At the moment it doesn't really work any better than the stubby antenna that the Baofeng came with.
Mudslinger - Simon
26TM274
26CT612

There is no such thing as a Fidelity 1000 which is too good to scrap.
Top

Hi, just done a quick check, from the end of the connector to the tip is 151.5mm.
I used an angle grinder with a 1 mm cutting disc to trim it as it cuts it nicely without ripping.
Top

What are you using to analyse hand held radio antennas? I'd like to sort mine.
Ranger RCI2950DX
Uniden UBC3500XLT
Baofeng UV5RC
Baofeng 888s
Top

Hi, Im using a Mini 1300 Analyser, type it into google youll see some videos of it in operation.
Works very well, scoped out my 934 mhz antenna and the throughline swr meter backed up what the analyser said.
Useful to have around for not a lot of dollars really.
Top

There is no such thing as a Fidelity 1000 which is too good to scrap.
Top

Ok, well went for a bit of ride today and took the little rig with me as seen in the photo from earlier.

Got myself a fairly decent position and put out a few cq calls on 446.006 (ch1) heard only a couple of workers yakking away who obviously had their ctcss set up.
Spent a few more minutes then got a response back from Kim at wolverhampton and then my best long range contact so far, Kenny in Stoke on trent- 56miles.
Also then contacted Pat in Stone Stafford a good 40 miles.
Had a good 10 minutes qso before going qrt.
Very impressed so far with this little radio, its done far better than I ever expected.

Last week did a test using the retevis dmr, crystal clear at 30 miles, just like they were next door, kid bro took the radio out some distance to test it out.
I reckon with a beam antenna on these youd get some great point to point contacts.
Top

I wonder if someone heard about TengKo RH 660S Antenna?

Its absolutely HUGE for handheld, expanded length is about 1m but I hear almost everything in 45-50 miles radius. Perfect for listening boats.

I found the Abree tactical fold up antenna works good on RX but on tx its way off on 446.
It has a number of resonant points but theyre not co-incidental with the frequencys I use so its stayed in the drawer for now.
The shortened Nagoya (or clone) is set to be on frequency at about 446.500, obviously its doing pretty well to get that kind of distance and get a radio 5 report back for it, its compact as well so im happy with it.
Top
Post Reply
15 posts • Page 1 of 1